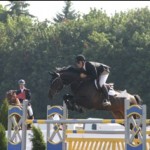 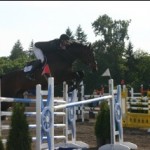 Interesting classes, a great exhibitor party and sun weren’t the only things that made Early Summer Classic enjoyable! Oz’s results continue to speak for themselves as Ozlings rise to the top of their respective divisions.

There were also several individual class winners worth recognition. Cartiano Z and Jeff won the Open Welcome 1.40 m class.  This was Carter’s first time at the 1.40m level and he made a fantastic showing.  Apache Joe won in the 7&8 year old jumper division, Lenamore Cavalier and Leslie Cox won two classes in the .85m Jumpers, Chanel and Alexandra Majer won in the High Children’s Jumpers, Contendra and Jeff won in the 1.20m, Locaro Z and Bryan Laycoe won in the Adult Hunter 50 and Over and Night Song and Tara Niculescu won in the Pre-Green 3’3” Hunter division. In addition, Alexandra Ulmer won in the 15 and Under Equitation, Legatus and Shelley won a High Performance Hunter class, Snow Patrol won in his Large Hunter under saddle and Adam 12 and Alexandra Zell won the Schooling Hunter.

Overall, the Early Summer Classic was a perfect beginning of summer and a fantastic show for Oz. Congratulation to everyone on their great results!

Saturday evening was the traditional Progressive Aisle Party and this year there was a carnival too. Dave Majer, the BBQ Master, made delicious chicken wings in the Oz aisle.  Thank you Dave – you singlehandedly made the Progressive Aisle party the best ever!  The clowns, great weather, super competition, 200 happy people, and a VERY popular OHJA fundraising Dunk-Tank certainly helped too!